Swinburne Pride 2019 has been confirmed as the biggest yet, with a record 500 students and staff participating in the Fair Day and Pride March.

The celebration of diversity, love and pride took place at Swinburne’s Hawthorn campus on Thursday 22 August, and this year's theme was 'family and relationships'.

Paving the way for transgender rights

Rebekah Robertson from Australia’s first parent-led, peer support network for transgender children and their families, Transcend, participated in the march and shared her story of raising transgender activist Georgie Stone. 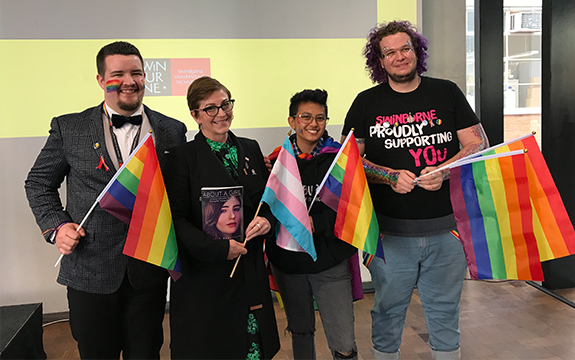 "My daughter Georgie knew she was a girl from age two, and it’s not been an easy journey."

Ms Robertson spoke of the heartbreak of Georgie coming home in tears because she was being bullied in school, and of people refusing to use her ‘she’ preferred pronoun and feeling suicidal.

"Georgie just wanted to be herself. We had to go the Family Court to access hormone treatment, which ruled that Georgie was competent to make her own decision to begin puberty-blocking medication."

Georgie’s case became the basis of the 2013 landmark decision to remove the Family Court’s jurisdiction and has often been cited as the beginning of justice for transgender children in Australia.

In her moving speech, Ms Robertson referred to a Trans Pathway study, that found four out of five transgender young people have self-harmed and almost one in two have attempted suicide.

"A lot of people say Georgie is lucky to have such a supportive family. I say no, all we ever did was love and accept Georgie for who she is. If anything, we are lucky to have Georgie as a daughter."

A Swinburne student who wanted to remain unnamed said as a gender diverse person they have benefitted from Rebekah and Georgie’s fearless campaigning for equal rights for transgender and gender diverse people.

"To hear her speak today…it was life-changing," they said. "The LGBTI community is made of many peoples, each with their own views, histories, struggles and celebrations."

"Swinburne is committed to a trans-friendly culture, free from discrimination and harassment, where all staff and students are treated with dignity and able to realise their full potential in a fair and inclusive workplace and learning environment."

For more images from the day, check out the Swinburne Pride 2019 photo album.