Galaxy found to float in a tranquil sea of halo gas 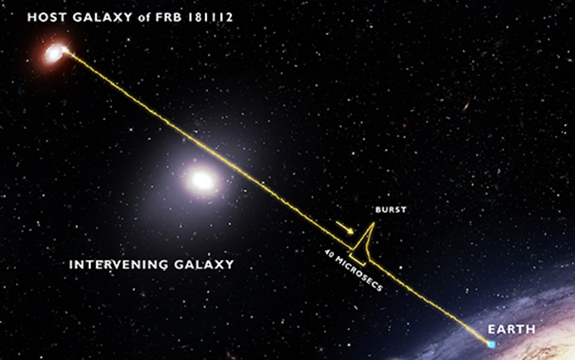 Artist's conception of fast radio burst's path to Earth. The burst passes through the halo of a massive galaxy and arrives unscathed, indicating halo gas is more placid than previously thought.

Using one cosmic mystery to probe another, a team of astronomers has analysed the signal from a fast radio burst (FRB) – an enigmatic blast of cosmic radio waves lasting less than a millisecond – to explore the diffuse gas in the halo of a massive galaxy.

In November 2018, the astronomers, co-led by Swinburne’s Dr Ryan Shannon, used the Australian Square Kilometre Array Pathfinder (ASKAP) in Western Australia to pinpoint a fast radio burst named FRB 181112. To their surprise, the burst passed through the halo of a massive galaxy on its way toward Earth, allowing them for the first time to get clues to the nature of the halo gas from an elusive radio signal.

Follow-up observations with optical telescopes in Chile showed not only its host galaxy but also a bright galaxy in front of it.

The new findings have been published online in the journal Science.

“The signal from the fast radio burst exposed the nature of the magnetic field around the galaxy and the structure of the halo gas,” says J Xavier Prochaska, Professor of Astronomy and Astrophysics at UC Santa Cruz and lead author of the paper.

“The study proves a new and transformative technique for exploring the nature of galaxy halos.”

Astronomers still don’t know what produces FRBs, and have only recently traced some of these very short, very bright radio signals back to the galaxies in which they originated.

“When we overlaid the radio and optical images, we could see straight away that the fast radio burst pierced the halo of this coincident foreground galaxy and, for the first time, had a direct way of investigating this otherwise invisible matter surrounding this galaxy,” says co-author, Swinburne PhD candidate  Cherie Day. The Swinburne team, which also includes Associate Professor Adam Deller, pinpointed the burst’s location and analysed its properties.

A galactic halo contains both dark matter and ordinary (‘baryonic’) matter, which is expected to be mostly hot gas. While the luminous part of a massive galaxy is typically 30,000 light-years across, its roughly spherical halo is ten times larger. Halo gas fuels star formation as it falls in toward the centre of the galaxy, while other processes (such as supernova explosions) eject material out of the star-forming regions and into the galactic halo. One reason astronomers want to study the halo gas is to better understand these ejection processes, which can shut down star formation.

Contrary to expectations, the results of the new study indicate a very low density and a feeble magnetic field in the halo of this intervening galaxy.

“This galaxy’s halo is surprisingly tranquil,” Professor Prochaska says. “The radio signal was largely unaffected by the galaxy, which is in stark contrast to what previous models predict would have happened to the burst.”

The signal of FRB 181112 consisted of several pulses, each lasting less than 40 microseconds (ten thousand times shorter than the blink of an eye). The short duration of the pulses puts an upper limit on the density of the halo gas, because passage through a denser medium would lengthen the radio signals. The researchers calculated that the density of the halo gas must be less than a tenth of an atom per cubic centimetre (equivalent to several hundred atoms in a volume the size of a child’s balloon).

At this point, with results from only one galactic halo, the researchers cannot say whether the unexpectedly low density and magnetic field strength are unusual or if previous studies of galactic halos have overestimated these properties. ASKAP and other radio telescopes will use FRBs to study many more galactic halos and resolve their properties.

Additional coauthors are from eight institutions in Australia, Chile, South Korea, and the United States. This work was funded in part by the Australian Research Council.

Earlier this year, Swinburne astrophysicists Dr Adam Deller and Dr Ryan Shannon, from the Centre for Astrophysics and Supercomputing, were part of a team that determined the precise location of a one-off FRB for the first time.

Dr Shannon also led the discovery of 20 FRBs in 2018, nearly doubling the known number of bursts at that time.