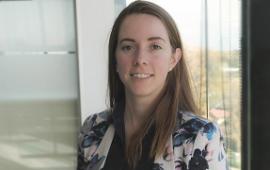 The Maconochie Prize, awarded by the Australian Psychology Society annually, recognises outstanding forensic psychology research by students published in a referred journal based on a student’s thesis.

In her winning thesis, Ms Simmons, who completed a Doctor of Psychology (Clinical and Forensic) at Swinburne, explored what behaviours parents of children aged 14 to 25 considered to be abusive as well as the characteristics of young people who were abusive.

“I created a measure that differentiated disrespectful but relatively ‘normal’ behaviour - such as yelling at a parent once - and abusive behaviour. Using this measure, I found that one in six young people met the cut-off for abusive behaviour within the past year,” Dr Simmons says.

“I feel incredibly grateful to be recognised by the Australian Psychological Society’s College of Forensic Psychologists with this award,” says Dr Simmons of her win.

The award was based on the first paper of Dr Simmons’ thesis.

“The process of writing this paper was not easy, as I had a lot to learn as a researcher and a writer. However, it is encouraging to see that that hard work has been well received.”

Dr Simmons is currently working as a psychologist at Forensicare in Melbourne’s east and as a Research Fellow at Swinburne’s Centre for Forensic Behavioural Science.

“I am continuing to build on my doctoral research by investigating risk factors related to child-to-parent abuse incidents reported to the police,” she says.

She is also collaborating with other Swinburne researchers to investigate risk assessment in corrections and forensic mental health settings in Victoria.