Kwangyul Jeong in the research lab with kendo equipment.

Kwangyul (Daniel) Jeong is a former professional kendoka in South Korea. He is researching how specialised sensor systems embedded in kendo gear can automate scoring systems and assist training and development for the sport. Kendo – a Japanese form of fencing with two-handed bamboo swords – was originally developed as a safe form of sword training for samurai.

Awarded a 6th dan kendoka this year and a four-time winner of the Victorian Kendo Championships, Mr Jeong is deputy head coach of the Australian National Kendo Team. The women's team came third at the recent 17thWorld Kendo Championships in South Korea. This is the first time an Australian team has placed since 1970. “My research involves the design of an automated scoring system for kendo. I believe that it can assist inexperienced kendo practitioners to judge if their attack is sufficient for scoring during their training. This scoring technology is for kendo practitioners with limited access to kendo instructors (or sensei, meaning teacher in Japanese) to be able to train in kendo correctly and effectively.

“My aim is to incorporate smart technology to assist these kendo practitioners in their training. We have successfully developed a Smart Kendo Sword. This is a bamboo sword equipped with sensors to assess the grip pressure of kendoka in their neutral stance and attacking motions. The Smart Kendo Sword provides feedback to the practitioner about their movement,” explains Jeong. 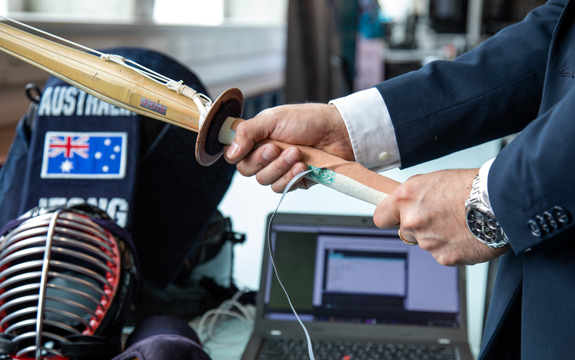 Jeong and his Smart Kendo Sword.

“We have also developed the Smart Kote Glove. This is used to assess the scoring parameters of Dan (black belt) and Kyu (below black belt and ungraded) grade kendokas,” he says.

Mr Jeong had access to many kendo resources when he started training in Korea. Learning correct movements as a beginner leads to faster kendo development and fewer injuries.

“My goal is to utilise technology to assist people in their kendo journey,” says Mr Jeong.

“In my most recent study, I developed the Kendo Men (head target) automatic scoring sensor by utilising pressure sensors,” he says. (Men is one of the five strikes in Kendoo – a long slashing stroke that falls on the centre-line of the head.) 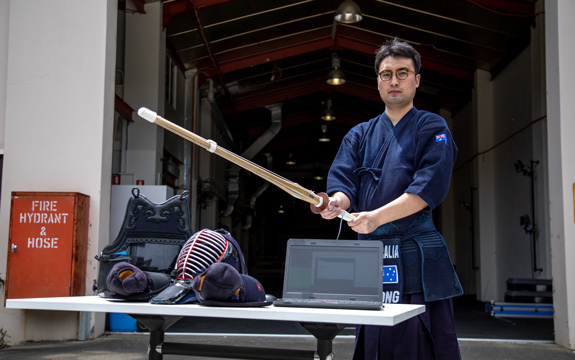 “The Men score is one of the most difficult to judge especially Men Aiuchi, when both players simultaneously hit,” he explains.

“In a recent kendo match in Japan the time difference between player A and player B for this move was 0.009 seconds. This demonstrates how difficult it is for an umpire to judge who hitsthe target first. The Kendo Men automatic scoring sensor assists a judge in this kind of situation,” says Mr Jeong.

‌Jeong’s kendo gear in the research lab at Swinburne.

Mr Jeong has a busy schedule. He trains in the evening and has national squad training on weekends. “My research is aligned with my kendo training and I get new ideas during training and conduct experiments during the kendo practice,” he says.