Organic, grass-fed and hormone-free: does this make red meat any healthier? Organic meat is grown without pesticides but there is little nutritional difference. | Jez Timms

Red meat is an excellent source of protein and essential nutrients such as iron, zinc, vitamin B12 and omega-3 fats, which are are linked to heart and brain health.

But while a small quantity of lean meat may be good for us, too much red or processed meat can increase our risk of some cancers.

Australia’s dietary guideline therefore recommend limiting lean red meat consumption to a maximum of 455g per week, which equates to three to four small pieces of cooked meat the size of the palm of your ha

Organic farming and grass feeding are promoted as having some social and environmental benefits compared with conventionally produced red meats. However, are they any healthier?

Organic produce is generally grown without synthetic pesticides, herbicides, growth hormones or the use of antibiotics. Certified foods have met the Australian government standards for organic produce, although there is no one legal definition of “organic”.

Organic farming can still use naturally occurring pesticides such as copper, sulfur and pyrethrins (pesticide-producing bacteria) which can also be harmful in large doses. However, levels of both synthetic and natural pesticides are low and well below recommended levels. These levels are monitored and enforced under the Australian Food Standards code.

Organic agriculture doesn’t use antibiotics to promote livestock growth. This is considered an important strategy in addressing the transmission of antibiotic-resistant bacteria to the environment and the food supply chain.

From a nutritional perspective, some organic meats have the potential to contain more omega-3 fatty acids. This is because organic livestock are more likely to be fed a forage-based diet such as grass, producing slightly higher omega-3 levels than grain feeding. However, a review of the research found little overall evidence of a difference.

It’s also unclear if these small differences translate into health benefits in the context of a balanced diet. 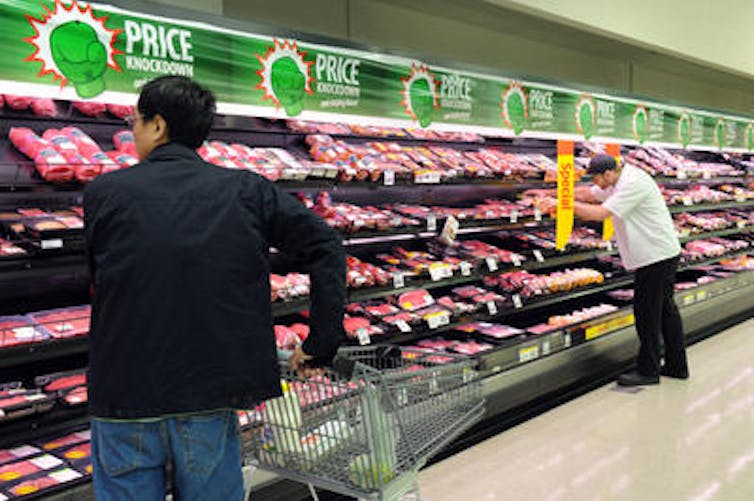 A key downside of organic meat is the higher cost. Estimates vary from one-and-a-half to twice as much as conventional meat, although the growth in organic agriculture could see prices fall.

Overall, the quality and nutrition value of non-organic and organic Australian meats is comparable. But some consumers will opt for organic meat for environmental and social reasons.

Australian guidelines allow the use of growth hormones to increase the weight of cattle. The hormones most commonly used as growth promoters – oestrogen, progesterone and testosterone – also occur naturally in a wide range of foods.

However, the difference in hormone levels between hormone-fed and hormone-free beef is small. A single consumer would need to eat more than 77 kilograms of beef from a hormone-treated animal in one sitting to get the same level of oestrogen hormone found in one egg.

Hormone levels are regulated nationally to ensure that they are safe for consumers and not harmful to animals. However, if you prefer it, hormone-free beef is widely available from supermarkets and butchers.

Grass-fed meat comes from animals that have only grazed on grass. The type of grass varies depending on climate and region.

Grain-fed meat comes from animals that are fed grass for part of their lives (variable duration) and then given a grain-based diet for the remainder, depending on market requirements and seasonal conditions. This is also referred to as “grain finishing”.

Livestock are grain-fed for several reasons, including: maintaining a consistent supply of meat; meeting market demand for marbled meat; increasing animal size; and providing sufficient feed when pasture is limited by conditions such as drought.

The main nutritional difference between the two is that grass-fed meat has a higher concentration of desirable omega-3 fats and potentially fat-soluble vitamins A and E.

However, the omega-3 content even in grass-fed beef is small compared to omega-3-rich foods such as salmon. Grass-fed beef contains around 90 milligrams per 100 grams, whereas salmon contains approximately 1.6-2.7g per 100g.

The omega-3 content of meat depends on the type of grass the animal consumed. An Australian study comparing meat from cattle grain-fed for 80 days with grass-fed animals found that grain feeding reduced omega-3 content in Australian beef, while increasing levels of trans and saturated fats.

It also found cattle that were grain-fed for longer periods had a higher total fat content. 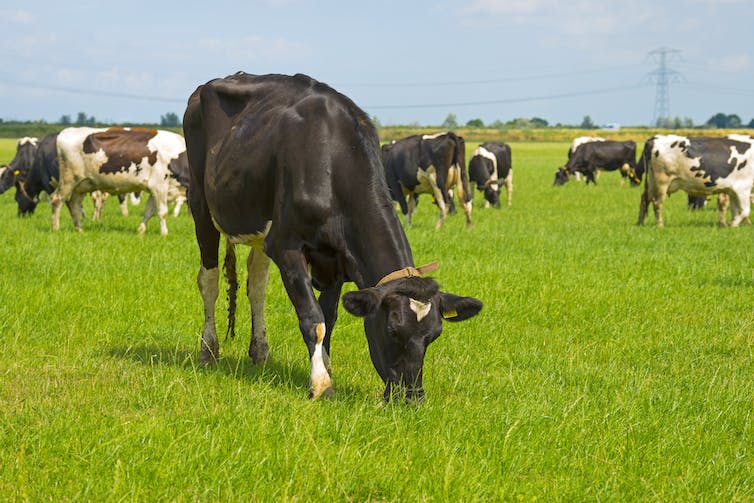 Grass-fed beef may be higher in omega 3 fats. | Shutterstock

To be eligible to use the “certified pasture fed” label in Australia, cattle must have had access to graze in pasture for their entire lives and not be confined to feedlots for the purposes of intensive feeding.

Certified pasture-fed producers may also be certified as free from growth hormones and antibiotics.

The downside is that you can expect to pay more for the meat, as raising cattle entirely on grass is more time-consuming and expensive.

Wagu is a breed of cattle known for its highly marbled meat, with fat inside the muscle.

As the duration and type of feed determine the overall fat content, meat from Wagu cattle fed a grain-based diet for more than 300 days will be highly marbled and high in fat.

A higher fat content means more kilojoules, but Wagu tends to have a better ratio of unsaturated to saturated fats than regular beef. A diet lower in saturated fats is better for your heart, provided that you eat appropriate portion sizes.

Again, the higher cost of wagu beef may be prohibitive.

MSA refers to Meat Standards Australia, which classifies meats according to a range of variables including colour, acidity, and fat marbling, as well as production variables.

For cuts of beef and lamb to be MSA-graded, certain standards must be maintained to ensure tenderness, juiciness and flavour. They are then labelled according to a recommended cooking method.

MSA-grade meat reflects how it was produced rather than the nutritional profile of the meat.

Cuts of meat with more meaningful labels such as “lean” generally contain no more than 10g of fat per 100g. “Low-fat” products must contain less that 3g fat per 100g.

Choosing lean cuts of meat will reduce your intake of saturated and total dietary fats, with benefits for cardiovascular health.

The term “premium” is not a regulated term under the food standards code and as such can be used by food suppliers to describe their product according to their own definition of quality.

There is no legislation covering “free-range” meats. These terms reflect the producers’ adherence to guidelines aimed at ensuring the humane treatment of animals. They don’t reflect the nutritional profile or health impacts, but rather the social and ethical considerations for consumers.

The nutritional profile of free-range meats is likely to reflect the diets of the cattle.

There may be slight nutritional differences between organic and grass-fed meat compared with non-organic and grain-fed varieties, but based on current evidence it’s unlikely to make a substantial difference to our health. It’s up to you whether you want to pay more for meat that accords with your social and environmental values.