Just as medical researchers seek ways of predicting heart attacks, so astronomers are looking for ways of forecasting supernovae – explosions in which a dying star or white dwarf briefly outshines its whole galaxy of stars.

Now researchers have found the first robust proof that a theoretical stellar shell explosion scenario, proposed in the early 1980s, truly exists in our Universe.

Jian Jiang, a PhD candidate at the University of Tokyo and colleagues, including Swinburne’s Emeritus Professor Jeremy Mould, discovered a precursor explosion of type Ia supernovae: a red optical flash.

Within a day of this flash, the researchers discovered a Type Ia supernova (named MUSSES1604D), using the wide-ﬁeld camera mounted on the 8.2-m Subaru Telescope in Hawaii, the Hyper Suprime-Cam. 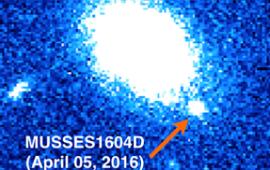 The small flash at the bottom right of this bright galaxy preceded the observation of a supernova explosion.

Follow-up observations carried out by eight telescopes around the world showed that this supernova phase, not seen in previous less time-intensive observations, is marked by a bright flash in the ﬁrst few days after the explosion.

Further analysis found that the new features observed in MUSSES1604D can be explained by a speciﬁc explosion model which indicates that explosion of helium on the white dwarf surface may be the trigger for the core explosion.

They found that the early-phase light, colour and spectrum of the supernova can be perfectly explained by a specific explosion mechanism, in which the accumulation of helium at the surface of the white dwarf ﬁrst ignites explosively. Shock waves generated by this precursor event spread inward to ignite carbon burning in the core of the white dwarf.

Professor Mould has worked on these supernovae during his career at Swinburne and is continuing his research. He was recently in Beijing for a meeting to celebrate his contributions to research into stellar populations and the cosmic distance scale.

The findings have been published in Nature.