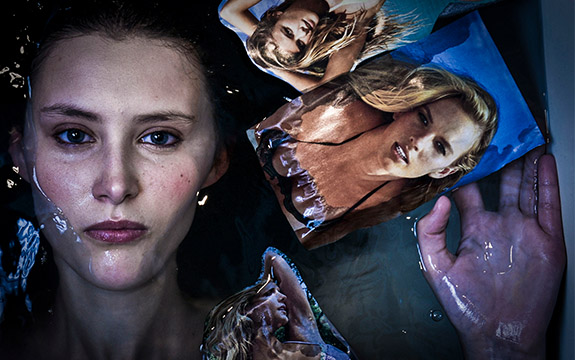 Those with BDD have difficulty recognising faces, bodies and emotions

A world-first study is aiming to alleviate symptoms of those with body dysmorphic disorder (BDD) through a unique visual retraining program. BDD results in an exaggerated perception of aspects of personal appearance.

Using eye-tracking technology, the initial stage of the study tracks the eye movements of individuals with BDD, exploring how they view faces and bodies, as well as conduct visual searches.

Participants can then undertake a visual retraining program designed to align their visual patterns closer to those of average individuals.

A research group led by Swinburne’s Professor Susan Rossell has corroborated and conducted research showing that BDD is associated with anomalies in processing a range of appearance and non-appearance related stimuli.

Some of these anomalies can be attributed to a preference for local processing, at the expense of higher-order global perception. In other words, people with BDD were seen as more likely to focus on smaller details at the expense of the overall ‘big picture’.

“Our program is unique as it focuses on addressing visual aspects of the disorder.”

In a Swinburne neuroimaging study, it was also demonstrated that persons with BDD had cortical thinning (reduced brain volumes) in areas of the brain that are known to be important for visual processing.

Professor Rossell hopes that the visual retraining program will help those affected by BDD to achieve more adaptive visual processing.

Obsessing over the data

Aiming to further understand BDD, Swinburne’s research group has also been exploring the link between obsessive-compulsive disorder (OCD) and BDD.

Published in the Journal of Obsessive-Compulsive and Related Disorders, their findings reported that persons with BDD, or OCD, tend to experience similar levels of anxiety and depression, and may also exhibit similar patterns of behaviour.

“Individuals with either disorder are likely to engage in repetitive or ritualistic behaviours, for instance, involving repeated checking, but in BDD these actions tend to manifest  in areas related to one’s physical appearance, such as checking how they look in mirrors or other reflective surfaces,” Professor Rossell says.

“These activities can take up to three hours a day for those with BDD.”

Swinburne’s research group has published seven papers throughout 2017 reporting on various cognitive and visual aspects of BDD, with the aim of refining their visual retraining program and helping those with the disorder.