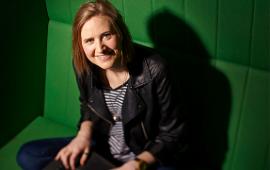 Laura Voss is not your typical gamer. She doesn’t suffer the particular pain of numb thumbs and her list of crushes doesn’t include video game characters. Well, maybe one.

Yet the Swinburne graduate has released her ﬁrst video game, Putty Pals, which has recently caught the attention of PlayStation, Nintendo and Xbox. Negotiations are under way.

Ms Voss is the creative director of Melbourne’s Harmonious Games. She co-founded the company in early 2016, aged 26, soon after graduating.

The team is made up of ﬁve of Ms Voss’s Swinburne classmates, plus an artist. A Film Victoria grant helped develop the game.

Putty Pals launched this February on Steam, a global online portal for buying computer games. It was a “soft launch”, to gather reviews to improve the game and get ready for the big time.

Ms Voss recently returned from the international Game Developers Conference in San Francisco, ready to join forces with the giants.

“It was an intense week for game developers from around the world, from the triple-As (big-name game companies) to the indies like us,” she says.

“We had meetings with PlayStation, Xbox and Nintendo.  We are looking to publish the game with them.”

Putty Pals was Putty Party when it began as a ﬁnal-year project, featuring “cute little faces” that look like animated emojis. A tornado has blown away the Pals and players work together to bounce, squish and ﬂing them along narrow bridges, across ravines and through treacherous tunnels on the way home to Puttopia.

“We wanted to bring back the old way of playing games, that you’d laugh together, give each other high ﬁves, be physically together,” Ms Voss says. “We’ve had loads of people who said they’ve wanted that again.

“I was adamant that there was no enemy. I wanted to show you can have a good game without killing or shooting. The most important thing is a good story.”

Ms Voss credits her degree in Video Games and Interactivity and Psychology at Swinburne and her Deakin drama degree for her skill in engaging the player.

“My psychology side is about cooperation and communication, and the drama side asks ‘how do we make this fun?’” she says.

“I love being part of good storymaking and creating new experiences for people, like theatre does.

“I get the same experience from reading a good book … it’s the fascinating story where I cannot wait to ﬁnd out what happens next.’’ Ms Voss says her passion was inspired by growing up with two older brothers who were into games. “I wanted to prove that girls were just as good. I did,” she says.