Swinburne Bachelor of Design (Communication Design) student Dominique Salvatore is one of four grand prize winners of the Disney Emoji as Told by You contest.

The contest, held by Disney Consumer Products and Interactive Media in partnership with Adobe, saw entrants design an emoji of a Disney character’s face.

The competition was open to students from selected countries aged 18–24, and ran for the first time in 2017.

Trip of a lifetime 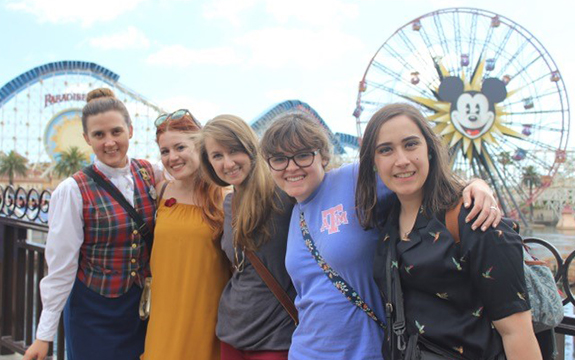 Each grand prize winner received a seven-day trip to Disney Consumer Products and Interactive Media in Los Angeles, California. During the trip, winners met with the team behind Disney’s As Told by Emoji video series.

“I don’t think I’ve ever been so inspired to create, take on different opportunities, as well as try areas of design I’d never considered exploring,” Ms Salvatore says.

“I established some great connections with people in industry.”

The trip was also a valuable opportunity for Ms Salvatore to network and gain insight into a professional company, particularly a global powerhouse as large as Disney.

Academic Director for External Engagement (Design), Dr Samantha Edwards-Vandenhoek alerted all students undertaking a Bachelor of Design to the competition.

“Swinburne’s design programs foster the confidence and capacity of our students by engaging with the real world of design from the onset of their studies,” Dr Edwards-Vandenhoek says.

Swinburne’s School of Design is an Adobe Partner by Design Education Institution. This affiliation provides design students and staff at Swinburne access to a range of learning resources, on-campus events, professional development, online programs and competitions.

“Dominique’s win is a reflection of her commitment and dedication to the development of her craft and is a testament to her capacity as an emerging independent designer.”

In March 2017, Swinburne announced a world-first strategic partnership with Adobe.

As part of the partnership, Swinburne will roll out Adobe Marketing Cloud, the most comprehensive set of digital marketing solutions, to spearhead Swinburne’s digital transformation.

Swinburne will also broaden the breadth of its digital advertising technology major and minor curriculum to incorporate the Adobe Marketing Cloud platform.

“At Adobe one of our big priorities is empowering students. We love giving them opportunities to be successful and launch their career by being creative,” Ellen Vanderwilt, Senior Manager, Campaign Marketing from Adobe says.