Road safety campaign focuses on the morning after drinking

The ability to drive safely and legally the morning after drinking alcohol is the focus of a new road safety competition for Swinburne design students.

Third year Swinburne Communication Design Honours students have been challenged to create a road safety campaign that builds awareness and changes behaviour in 18–25 year olds about driving the morning after drinking heavily or late into the evening.

The campaign is led by Melbourne creative agency Hard Edge in collaboration with Swinburne and several other organisations with a passion for improving road safety, including the Transport Accident Commission, the National Road Safety Partnership Program, RACV and Transurban. 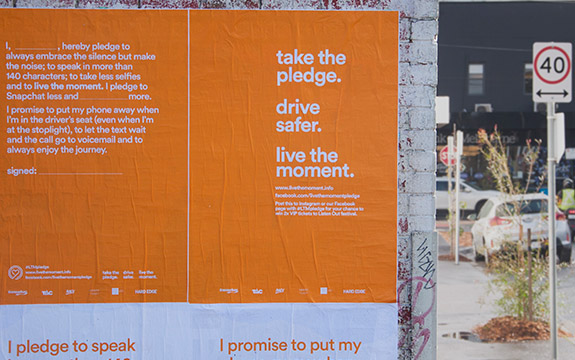 “I’ve been impressed with the enthusiasm from our design students in taking up the brief for the 2017 campaign,” Swinburne Associate Professor Nicki Wragg says.

“We’re all excited to see what creative and innovative ways the students come up with to extend the drink-driving message to their peers and the wider community.”

Hard Edge managing director Andrew Hardwick and Swinburne design course directors will join representatives from each of the partners to judge entries in May. The winning campaign will then be developed and rolled out at Swinburne’s Hawthorn campus.

In 2016 the competition challenged Swinburne Communication Design students to develop a creative execution that generated awareness about mobile phone usage while driving and mobile phone addiction.

Ms Young says the idea for her campaign came after she conducted research with her peers.

“Through my research it became clear that it’s a matter of smartphone addiction. I didn’t feel many existing campaigns, both locally and overseas, addressed this. They focused more on the consequences of irresponsible driving and were essentially telling people off,” Ms Young says.

“I wanted to change the conversation to say ‘hey, if we get off our phones when we don’t need them, what new experiences are we going to become a part of? Let’s not miss our journey, and just live the moment!’”

Ms Young won funding to activate her idea at Swinburne’s Hawthorn campus, as well as a one-month paid internship at Hard Edge.