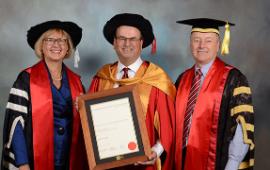 Throughout his research, career spanning 44 years, Professor Mould has made a number of discoveries and is highly respected for his contribution to our understanding of the Universe.

In 2009, he shared the prestigious Gruber Cosmology Prize for his work leading an international Hubble Space Telescope project that measured the age of the Universe at 13 billion years.

In 2011 Professor Mould took up a professorship at Swinburne’s Centre for Astrophysics and Supercomputing.

His work has contributed to the university’s ERA 5 rating for Astronomical and Space Sciences putting it well above world standard. In recent years, he has also played a pivotal role in setting up the Stawell Underground Physics Laboratory, which has allowed astronomers to search for dark matter from a gold mine, more than a kilometre underground.

Two other leaders in their fields have also been recognised by Swinburne at this week’s graduation ceremonies.

Brian Sadgrove has been awarded an Honorary Doctorate for his contributions to Australia’s graphic design industry.

Mr Sadgrove has been a key influencer in his industry, designing logos for Channel Nine, Quit, Heart Foundation and Yarra Valley Water that are still in use today. 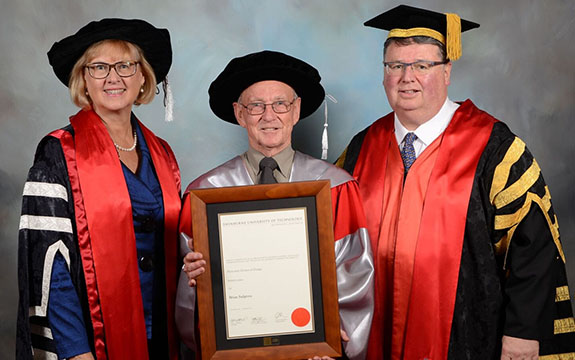 Swinburne welcomed Mr Sadgrove as a Course Advisory Committee member for Visual Communication Design in the 1990s. He continues his involvement at Swinburne as an external examiner for student portfolios.

Phillip Butler has also been recognised with an Honorary Doctorate for his work in Small to Medium Enterprise (SME) manufacturing.

Mr Butler transformed Textor from a struggling Melbourne textile manufacturer to a global exporter of textiles for the hygiene industry. 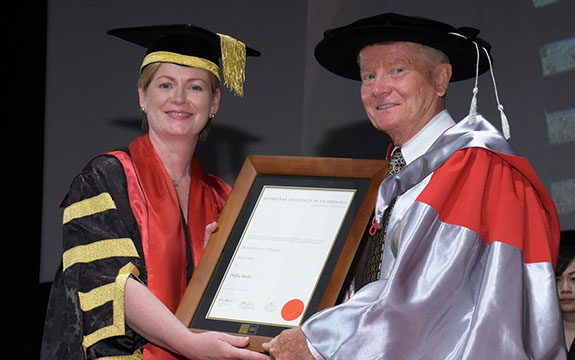 Mr Butler is an advisory board member for the Centre for Transformative Innovation where he provides strategic advice on the development of the centre, looking at public and corporate policy regarding innovation.