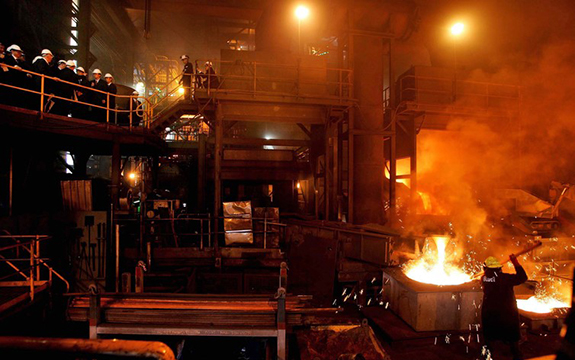 China will dominate global steel production, but Australia can have a future in high value steel making - if we don’t lose our nerve. AAP

Analysis for The Conversation by Professor Geoff Brooks, Swinburne University of Technology.

Recently, I met a friend at a conference in Japan. My friend is a specialist in steelmaking technology and, after a long successful career in Japan, had taken up a position in a Chinese Steel company called Shasteel. He described how this company had grown from producing two million tonnes of steel a year a decade to now producing 35 million tonnes per annum.

Thirty-three million tonnes of new capacity in just over a decade!

One company has built the Australian steel industry four times over in a decade.

The implications are extraordinary because you can’t build 33 million tonnes of steel capacity in ten years without also having to build the associated infrastructure, railway lines, roads, ports, storage areas for ore and coal and schools for the children of the workers. Shasteel have also had to find the expertise to operate the plants and sell the products. Just the management of this growth would be a daunting task, not forgetting the environmental and safety implications of this type of expansion.

As we were discussing this amazing development, I remembered some important history. In the early part of the 19th century, the English dominated steelmaking, then the Americans greatly expanded their steel capacity from the late 19th century until well into the 20th century.

In the 1970s and 80s, the Japanese and Koreans started to build up steel capacity, while the Americans and Europeans contracted their production. Now, the greatest industrial revolution of all time is in full swing; steel production in the world has roughly doubled (750 to 1500 million tonnes per annum) in fifteen years and it is the Chinese who now dominate world steel production. The implications are clear. Steel production is an excellent indicator of industrial power and international influence. Once the English ruled the world, then the Americans and now the Chinese are accelerating rapidly towards that position. There has been lots of discussion in the west about nanotechnology dominating the future and talk of “post-industrial” societies but while we still build cars, railways, buildings, fridges and bridges using steel, steel production will remain an important measure of wealth.

Of course, as the economic historian Niall Ferguson has warned, to assume that such growth will continue is very dangerous. History has shown that internal conflict, poor investment choices and ill-advised foreign wars can scuttle this type of economic growth. However, if an iceberg is going to sink China’s giant ship, nobody seems to have spotted it yet.

Australia’s part in this story is interesting. During this period, we have been supplying the ore and coal to fuel all these new furnaces. The wealth generation from this activity is large in our country and it is well documented how this boom has both boosted and distorted our economy. On the steel capacity side, in the 90s there were four notable attempts to increase our production capacity; one was the failed HBI (Hot Briquetted Iron) plant in Western Australia, which cost BHP billions.

Another attempt was Rio Tinto’s foray into new ironmaking technology (HiSmelt) which has yet to be commercialised after over twenty years development - it has now been combined with a European technology that is being tested in the Netherlands. BHP did build a new state of the art Blast Furnace in Port Kembla in the late 90s, which was closed last year due to Asian competition.

On the positive side, there was construction of a new mini-mill in Sydney, which after several years of community consultation was commissioned in the early 90s and is still operating. The Sydney mini-mill has a capacity of only a few hundred thousand tonnes. China is building a new Sydney Steel mill in the same time that we take to compile an environmental impact assessment.

The conventional wisdom to explain why we have such a small steel industry, given our significant natural advantages of plentiful ore and coal, is that we have a small local market and are far away from large markets. This argument, while partly true, seems to be at odds with the success of countries like Sweden, who manage to sell steel and manufactured goods all over the world. True, they can sell directly into the European market - but we can we sell directly into the South East Asian market.

One could argue that we would face less competition than the Swedes, who directly compete with German, French and English companies. In the 1990s, BHP had a plan to develop a network of mini-mills throughout South East Asia using new casting technology developed in Wollongong. This plan fell through and the technology shifted to North America.

I will provide a different explanation. The Australian steel industry was developed as a monopoly for much of its history. The government protected BHP’s domination of local production for many decades. This cosy situation was not encouraging for new players. When the barriers came down, our major companies made some serious blunders (Prima case: the HBI plant in Western Australia) in trying to expand. As a country, we lost our nerve in this vital industry.

There has been a downward spiral since these failures, as a rising Australian dollar put enormous pressure on the already small local steel industry. The steel we make is largely conventional grade material; the Chinese can make the same stock standard materials using our ores much cheaper than we can.

I think we can turn this around. I would argue that we should start developing a new steel industry built around our great natural advantages but focused on producing steel products that the Chinese can’t make. If we can be smart, we can produce high value steel products that are linked to high technology manufacturing. We need to get over the idea that “steelmaking” is an old fashioned industry; clearly, it’s a vital industry with many technical challenges facing it. High grade steel products require a high level of scientific input. The Korean steel company, Posco, has its own university and other successful companies in Japan and Europe invest heavily in R&D.

In Australia, steel specialists in universities like myself, are earning a lot of frequent flyer miles, as we travel around the world, working and advising companies that use our country’s raw materials to make steel.

At the conference in Yokohama where I met my friend, I was an invited speaker and a guest of the Japanese steel industry. The conference was well attended by young engineers and PhD students from across the region.

I was deeply flattered to find researchers from leading Japanese universities familiar with my work. I had many in-depth conversations about steelmaking technology that would be hard to reproduce in Australia, in terms of quantity and quality. As I took a bus back to the airport to return home, I passed several large steel plants along the freeway. As I counted the number of blast furnaces and estimated the size of the plants, I felt uneasy at the thought that almost certainly these plants are fed on Australian raw materials.

Somehow, we have managed to become bit players in the Age of Steel.

Geoffrey Brooks, Professor of Engineering, Swinburne University of Technology.  This article was originally published on The Conversation. Read the original article.